It’s the beginning of June 2020 and the noctilucent cloud season has started!

If you were asked in a family Zoom pub quiz to think of some famous arch-enemies who would spring to mind? Probably Sherlock Holmes and Moriarty? How about Harry Potter and Voldemort? Definitely Tom and Jerry, right?

If astronomers have an arch enemy it is clouds. Time and time again they ruin our views of rare astronomical events such as the northern lights, meteor showers and eclipses. But you might be surprised to learn that there’s one type of cloud star-gazers actually look forward to seeing, and the good news is that now is the best – in fact the only – time to see them. They are called Noctilucent Clouds, or NLC for short.

We can only see NLC in the northern hemisphere’s night sky in summer, between the end of May and the end of July (a period we call the NLC Season) because that’s the only time they can form. NLC are icy clouds that form way, way up in the atmosphere, at a height of 80km or so which puts them on the edge of space. The meteorological conditions that lead to their formation up there only come together in the summer, and even then not every night, so they are a celestial treat we hope to see but can’t be sure of seeing. Dedicated NLC-watchers monitor various websites to get some advance warning that a display might occur, and they use social media to let each other know when a display is in progress, but it often just comes down to going out on a clear summer’s night and seeing if anything is going on.

The clue is in the name! “Nocti” means night, and “lucent” means shining, so NLC are night shining clouds. They look like streamers, streaks, billows and wisps of blue-white cloud, clearly visible to the naked eye, hanging above the northern horizon after midnight on summer nights. They move, but unlike the northern lights which sway and jiggle about quite quickly, NLC move so slowly you can only detect their movement over a matter of minutes. Most displays are quite modest, but occasionally a display really brews up into something very special, with NLC painted across the sky from the north-west to the north-east. A really good display can last for hours, and still be shining high in the east as the sky begins to brighten with the approach of dawn. Some displays are little more than a few teased-out streamers and tendrils of light cloud, others develop very complicated structures and shapes, almost looking like a force field or wormhole special effect from a science fiction film.

When should you look for them?

The best time to see them is from around one hour after sunset to one hour before sunrise, so around 11:30pm to 2:30am. At the time of the Summer Solstice (the longest day 20th June) NLC’s may not appear until after midnight, however occasionally a particularly good display can begin to show itself as soon as the sky begins to darken.

Some astronomers don’t think NLC are an astronomical phenomena – they say they are just clouds! But many stargazers and skywatchers absolutely love observing NLC, because, after all, the nights of summer are so bright that we can’t see the faint galaxies, star clusters and nebulae we drool over at other times of the year, so it’s good to have something interesting to look at. And they are genuinely beautiful to look at, too. A telescope will be no use for observing them with, they are just too big, but a pair of binoculars will help you appreciate the subtle structures and colours of an NLC display.

I’ve been observing NLC for around 40 years now, and they are one of my favourite things to look at in the sky. They can be very frustrating – just because the sky is clear it doesn’t mean you’ll see them, and it’s infuriating to be stood under a fantastically-clear and still night sky without any trace of NLC – but a big display is an unforgettable sight, and there genuinely is nothing else like it in astronomy. Over the years I’ve watched NLC from many different places, from lonely lay-bys out in the countryside, from quiet campsites in the Scottish Highlands, even from beaches on the east coast! Now I live in Kendal, in the beautiful Lake District, I observe them from the ruins of the 800 year old castle that overlooks the town, and love photographing them from up there, shining above the distant Cumbrian fells and casting a pale blue light on the castle’s crumbling walls and towers. I can be up there until four in the morning sometimes – which is always fun when my shift at work begins at seven… It’s worth losing sleep tho, because a big display of NLC is a truly unforgettable sight.

The good news is that there have already been some displays of NLC, so that might…might…be a good omen for a busy and beautiful NLC season ahead.

Follow Go Stargazing on Facebook and Twitter for reports on NLC activity — we’ll try our best to put out “get out and look North now!” alerts if a display kicks off. You could also follow these social media accounts: 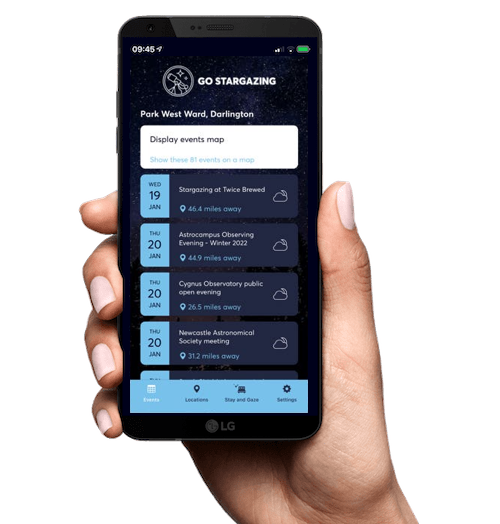